No new car for Commodore Cup

No new car for Commodore Cup 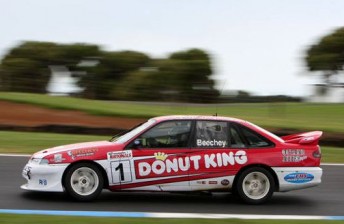 Adam Beechey wrapped up the 2011 title at the weekend

Commodore Cup National Series organisers have confirmed that the class will run under its current technical regulations next season, ending speculation that a newer model car will be introduced.

The category has featured the current mix of VB-VH and VR-VS Commodores since 2004, with the latter cars continuing to run the older 4.2 litre V8 running gear.

While the idea of introducing a new bodyshape and engine package has been widely discussed, series organisers hope that continuing with the current rules will give existing car owners confidence to prepare their entries for the 2012 season.

This year’s series concluded at Phillip Island at the weekend, with Adam Beechey securing his second consecutive crown amongst a field of 14 cars.

The category will once again race on the Shannons Nationals presented by Hi-Tec Oils card next year, having confirmed a six round calendar that will see the Commodores return to South Australia’s Mallala circuit after a one-year absence.

“It is important to give people plenty of lead time to ensure they know what is happening with technical and sporting regulations.

“This year has worked well and as such we are continuing on with it into next season.

“Commodore Cup is looking forward to returning to Mallala after a years’ absence as well as visiting some of the great circuits that have provided plenty of action this season.”

See below for the 2012 Commodore Cup National Series calendar