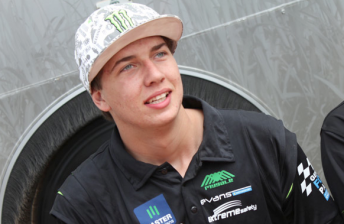 Chaz Mostert is set to drive with Ford Performance Racing in the final two rounds of this year’s Fujitsu V8 Supercars Series.

After contesting the first five rounds of the development series with Miles Racing, Mostert will drive an ex-Mark Winterbottom Ford Falcon at Sandown and Homebush.

The possibility of the entry was first reported by Speedcafe.com. CLICK HERE for last week’s story.

Speedcafe.com expects the news of Mostert’s drive to be confirmed by the factory Ford team in the coming days.

It is believed that the deal is only for two rounds, although dialogue is underway about FPR entering Mostert in a full program next season.

Mostert and FPR Team principal Tim Edwards could not be contacted by Speedcafe.com today.

There has been no official news to come from Miles Racing, although the team did make a recent post on its Facebook page, stating that former Formula Ford driver Ryan Cochran “could possibly get strapped into the seat of the new Miles Racing FG in a couple of weeks at Sandown.”