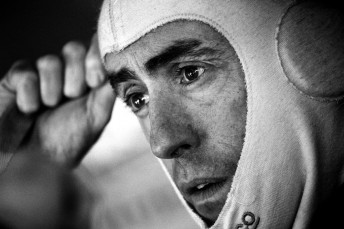 David Brabham has been involved in a race ending accident at the start of the final race of the FIA GT1 season in Argentina.

Starting the championship race from the fourth row of the grid, an incident as the race went green saw several cars come across and collect Brabham’s Sumo Power Nissan GT-R.

“There wasn’t much to report from the championship race other than I had a good start because my race ended shortly afterwards,” said Brabham.

“There was an accident to my right off the line. Where we started from seventh on the left side of the track, it was really dirty, so when I hit the brake I just slid.

“I got hit from all directions and slammed into the wall before I came to a screeching halt with broken cars all around me.

“It was quite a heavy impact but I’m OK, just a bit stiff. 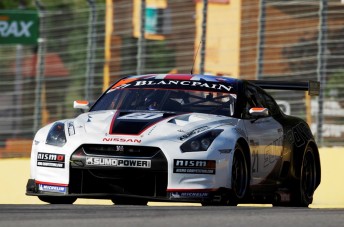 Brabham behind the wheel of the Sumo Power Nissan GT-R

Brabham came into the race with high hopes, having qualified for the qualifying race third.

“We qualified third and were by far the quickest in Saturday’s qualifying race,” said Brabham.

“Unfortunately, we had a pit stop problem and a sticking wheel nut cost us 22 seconds, and we lost the race by 22 seconds.

“I was quickest by quite a margin and we were in the top three in most sessions. The car felt really good and that gave me a lot of confidence.

“This weekend was our strongest showing in terms of pace, particularly in the races where it mattered. We showed our potential.”

Despite failing to record a race win in his debut GT1 season, Brabham enjoyed the racing.

“It’s disappointing to finish the season without a win but, to be fair, I know from experience you only win when you are ready to win,” said Brabham.

“Considering we were effectively a brand new team at the beginning of the year, with such tough competition I think we did well to get four podiums.

“It’s a tough championship and one I’ve enjoyed immensely.

“It’s been a pleasure racing for Sumo Power GT and all the boys, my thanks go to the entire team, especially Jamie (Campbell-Walter) as I’ve really enjoyed being his teammate.”

Brabham and Campbell-Walter finished the series in equal 10th place, while Michael Krumm and Lucas Luhr took out the 2011 championship.

“I have a few options. At this stage I’m not really sure what lies ahead but I’m sure something will be sorted fairly soon.”