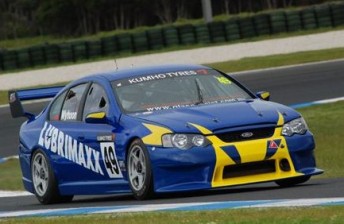 Terry Wyhoon has been confirmed as the 2011 Kumho V8 Touring Car Series winner after completing a clean sweep of the final round at Phillip Island.

The former Australian NASCAR driver finished off his perfect weekend by leading every lap of Race 3 from pole position.

With fellow front-row starter Scott Loadsman retiring on the opening lap with mechanical issues, Justin Garioch was left as Wyhoon’s only serious rival.

The youngster ended the race just 0.4s adrift of Wyhoon, with the race having been shortened to a five lap affair prior to the start due to the delays experienced earlier in the day. CLICK HERE for separate story.

“It’s been a hard battle – it’s been a good series this year and I think it’s only going to get stronger,” said Wyhoon of the series.

“I’ve got a bit of an unfair advantage over everyone else here in my crew. They just work their guts out, and it’s a credit to them the way they put these cars together.”

Pollicina had run as high as third before losing places while taking avoiding action as Michael Bartsch spun while attempting to take the position at Honda Corner. The Falcon driver would eventually finish in 10th and last place.

A mechanical issue prior to the start of the race also signalled a tough end to the season for Commodore VY driver Matt Hansen.

The combined results for the weekend see Wyhoon, Garioch and Loadsman complete the round podium.

Loadsman ends the season second in the points standings, 69 behind Wyhoon’s total of 544, with Smerdon third on 355, Justin Garioch fourth on 331, and Pollicina fifth on 311.