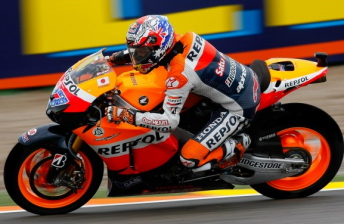 Casey Stoner has closed the 800cc era in MotoGP with his 10th victory of the season at Valencia today.

The Australian, who wrapped up the title at Phillip Island last month, narrowly took the win over Yamaha rider Ben Spies by a margin of one hundreth of a second in an exciting season finale.

From pole, Stoner drove away from the field as Spies battled with Dovizioso and the other Honda rider Dani Pedrosa. When light rain began to fall, Spies had the edge and hunted down Stoner. With two laps remaining, Spies was in front, but Stoner held onto the American and got a better run out of the last corner to slip stream his way past on the front straight.

Tech 3 Yamaha’s Cal Crutchlow took a fine fourth place finish and the Rookie of the Year honours. His claim for the rookie title was assured when Cardion AB Ducati’s Karel Abraham crashed.

A first corner accident took out three of the leading contenders when a collision between Dovizioso and Alvaro Bautista (Suzuki) led to Bautista falling, wiping out the Ducatis of Valentino Rossi and Nicky Hayden, as well as Randy de Puniet (Pramac Ducati).

In the Moto2 class, Michele Pirro took his first win and gave Gresini an emotional victory – two weeks after the death of its team’s lead MotoGP star Marco Simoncelli. The Moto2 class was won by Stefan Bradl, who failed to finish.

And in the final 125cc championship race (replaced Moto3 next year), Nico Terol became the last ever champion of the category. The race was won by Maverick Vinales.