Gilmour strikes back in F3 Race 3

Gilmour strikes back in F3 Race 3 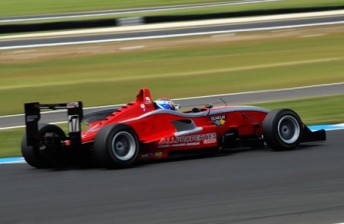 Formula 3 Australian Drivers’ Championship leader Chris Gilmour has turned the tables on rival James Winslow by winning the final race of the weekend at Phillip Island.

Following Winslow’s victories in the opening two races, Gilmour rocketed from third on the grid to the lead of Race 3 thanks to a tremendous start and a brave outside move on the Briton through Turn 1.

Winslow and John Magro continued in hot pursuit of Gilmour over the 10 lap duration, with the Team BRM driver eventually finding his way into second place on Lap 8.

Magro was less than a second adrift of his fellow Queenslander at the flag, with Winslow, Matt Sofi, Steel Guiliana, Ben Gersekowski, Josh Burdon and Roman Krumins rounding out the field.

With Race 3 carrying a heavier points weighting than the opening two encounters, the results saw Winslow take the round win by one point from Gilmour, with Magro just four points further adrift in third.

“That was just about as perfect as it gets,” said Gilmour after Race 3.

“I was a bit uncomfortable yesterday and not in the right headspace so I didn’t get the best start but today I knew what we had to do and was able to do it. The start was great and I was able to maintain the lead all race.

“I think it’s the best race I’ve ever driven and certainly one of the most satisfying. I want to win this championship more than anything else so this is a great confidence boost and gives us a great start ahead of Tasmania next week.”

Gilmour will enter the final round of the championship at Symmons Plains next weekend with a 19 point advantage over Winslow, with Magro 18 points further adrift in third.

Guiliana and Gersekowski will fight it out for the Forpark National Class honours, and are split by just 12 points heading into the season finale.