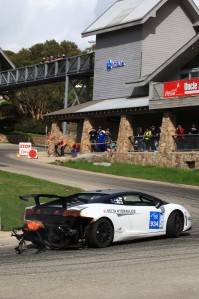 Jason White on fire at the finish. Photo: Perfect Prints

The Tasmanian, at the wheel of a brand-new Lamborghini, needed to set a blistering time on the final run up Mt Bulla, but spectators and fellow competitors were stunned to see the flames from the rear of the Gallardo Super Trofeo Stadale over the final kilometres up to the top of the ski resort.

White headed into the final stage trailing Tony Quinn in a Nissan GT-R by four seconds. He not only won the stage, but incredibly the event by 10 seconds.

“It was on fire since around the halfway mark of the stage,” said White after he completed the stage and had the fire extinguished.

“With a win at stake we kept on it – which wasn’t easy with a fireball out the back!

“We had some type of fuel issue which could have been related to the fire, but I think with all that happened we only lost a handful of seconds.”

White took a 10 second lead into the final day after a blistering sprint up Mt Buller late yesterday saw him take 30 seconds off his rivals.

But he threw that advantage away on the first stage off the mountain, when he misjudged the base time and lost 25 seconds to Quinn, who suddenly was 10 seconds clear in his Nissan GT-R with seven stages remaining.

The top two then swapped fastest times on the run to Eildon and back, arriving at the base of the mountain for the final run to the resort village just four seconds apart – the Nissan with the slight advantage.

Quinn finished the Mt Buller sprint in 9 minutes 44 seconds. White followed up, but half way up the 18-kilometre stage the rear of the car was on fire. But he charged on regardless, crossing the line with a time of nine minutes 30 seconds, handing him a 10-second victory and top points in the series opener.

He finished, ironically, outside the Mt Buller fire station, with extinguishers at the ready to avoid the disaster of seeing his $600,000 Lamborghini going up in smoke.

Four-time Australian Rally Champion, Simon Evans, driving a Mazda3 MPS, was without peer in the Showroom class, adding this class tarmac title to his many victories on dirt.

The TMR Performance Showroom 4WD class victory went to Ric Shaw in a Mitsubishi Lancer Evo X, winning by just one second over fellow Mitsubishi driver Dean Evans, who had lead from the start on Saturday only to be piped on the post after suffering a puncture on the penultimate stage.

Siddins was compensated with a victory in the Shannons Early Classic Handicap competition. Bruce Power won the late Classic battle.

The series continues in January, with the running of round 3, Targa Wrest Point in Hobart.

Check out the videos of White in the closing kilometres