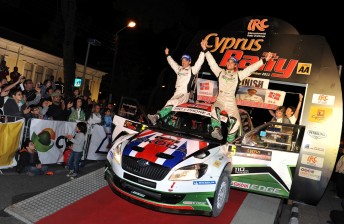 Andreas Mikkelsen has become the youngest driver to win the Intercontinental Rally Challenge (IRC) after claiming victory on the season-closing Cyprus Rally – Mikkelsen secured the title by one and a half points from Jan Kopecký.

Mikkelsen, driving a Škoda UK Motorsport Fabia Super 2000 led for all but one stage of the mixed-surface event based in Pafos in the south-west of the Mediterranean island. One of five drivers in contention for the coveted IRC title at the start of the rally, Mikkelsen had to win the event in order to become champion.

Apart from a spin on Friday and a puncture on Saturday morning, little troubled the Norwegian who becomes the fifth different IRC champion in as many years. Mikkelsen, who switched to rallying as a 17-year-old when injury curtailed his promising skiing career, was almost forced to stop competing when he ran out of funding prior to the 2009 season.

He hit back by securing a drive with ŠKODA’s UK importer for the 2011 season after impressing in the IRC in 2010 in a privateer M-Sport Ford Fiesta. Despite a troubled start on Rallye Monte-Carlo, when he crashed on the opening stage, he slowly improved his form and came close to winning several rallies before taking his maiden win on the penultimate round in Scotland last month to set up a title challenge in Cyprus. As well as winning two rounds outright, Mikkelsen scored more stage wins than any other driver with a total of 38 fastest times during the year.

“To become IRC champion is such a fantastic feeling, the likes of which I have never felt before,” said Mikkelsen.

“It’s been a tough season, which didn’t start so well in Monte Carlo but which has just kept getting better and better. We’ve had a fantastic second half of the year and wow, to finish with a win in Cyprus and the IRC drivers’ title; I can hardly believe it has happened. It’s like a dream.

Nasser Al-Attiyah, last season’s Cyprus Rally winner, had started the final day with an outside chance of victory and went fastest of all on Saturday’s third stage. However, an engine failure meant he was unable to continue after midday service, handing second place to factory Škoda driver Kopecký, who has been runner-up in the IRC standings for the last three seasons.

Patrik Sandell took third with his best finish of the season for Škoda Sweden, Estonian teenager Karl Kruuda, in a privateer Fabia, impressed in fourth, snatching the position from Freddy Loix when the Belgian’s BFO-backed Fabia developed a mechanical fault on the penultimate stage.

Most of the crews will be back for the Golden Stage shootout where EURO150,000 will be up for grabs over just two runs of a mixed surface stage in Cyprus tonight Australian time.