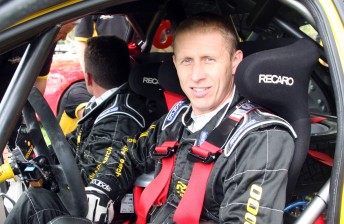 Alister McRae in control in China

The Proton factory driver did not put a foot wrong all day and driving with confidence especially on the tight mountain sections.

“The car feels great and we were able to push hard from the very first special stage,” said McRae.

“The overnight rain meant conditions were tricky with some slippery stretches but we were fortunate to have been spared of any dramas.”

Team-mate Chris Atkinson is third and nearly two minute adrift and is unable to put a finger on why he hasn’t been able to keep pace with McRae.

The Protons are split by Finnish driver Jari Ketomaa and while a minute down on McRae is ready to strike if the Perth-based Scotsman has any problems on the second day.

Indonesian driver Rifat Sungkar has had a day to forget after two punctures cost the Pertamina-Cusco driver over 10 minutes and is currently down in 10th place overall.

Sungkar’s team-mate Yuya Sumiyama is fifth overall and ready to up the pace on the second day.

Coffs Harbour’s Nathan Quinn dropped to 23rd place after a wheel rim shattered and destroyed the brake lines. Further problems in the afternoon cost the young Australian more time but is happy to be still in the event and learning the Chinese roads.