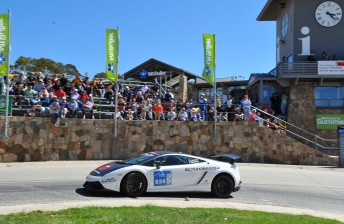 Tasmanian driver Jason White has produced a remarkable drive up Mt Buller to snatch the lead from Queenslander Tony Quinn on the last stage of the opening day at Targa High Country, to take a handy 11-second buffer into the final day on Sunday.

White, driving a brand new Lamborghini finished less than 24 hours before the rally started, trailed Quinn in a Nissan GT-R by 19 seconds going into the final stage, an 18 kilometre sprint up the hill to the ski resort.

That margin was due to an error on the day’s sixth stage that left White stranded on the start line for around 20 seconds before he could get his Italian supercar going. He was back in fourth place with a victory tomorrow looking unlikely.

As he took off from the base of the mountain for the final stage of the day, it was almost unthinkable that White could take well over a second a kilometre off every other driver in the field. But he did just that with an effort that left competitors and officials gobsmacked.

“We’ve had a pretty eventful day, but I got used to the new car quicker than what I thought I would,” White said.

“I stalled the car on the start line of the second stage this afternoon, and we lost a heap of time while I got the car restarted again. That dropped us from a second off the lead to about 20 seconds from the lead.

“We then had a pretty good run up the mountain on the final stage of the day which put us back into the lead,” said White, understating his performance.

“But our consistency needs to be better over tomorrow’s final eight stages so that we can retain our lead and bring it home on the podium.”

Four-time Australian Rally Champion, Simon Evans, has dominated the Showroom class in his Mazda3 MPS, and looks set to add a tarmac title to the many he’s won on dirt.

“Today was absolutely fantastic,” Evans said. “I think the key for us was being able to adapt to the changing conditions.

“The Mazda was fantastic, it’s a great little car and that shows with us leading the Showroom category.

“To be honest we were conserving tyres today so that we can save them for tomorrow. I could brake a little bit later, but I spent the day getting to know the car – there’s a little bit left, but I wouldn’t say there’s much more.”

Sunday sees the 160-strong field tackle a further eight stages and 129 competitive kilometres from Mt Buller down to Jamieson and back, with the winners crowned on the in what is round two of the CAMS Australian Targa Championship.