The Touring Car Masters and Vodka 0 Australian GT Championship will both be a part of the Shannons Nationals presented by Hi-Tec Oils next season.

The Nationals will boast a full nine-round calendar in 2011, kicking off at Eastern Creek in March and concluding at Sandown in November.

The schedule will also see a return to Mallala, Phillip Island and Wakefield Park, while Queensland Raceway replaces Morgan Park as the Sunshine State’s sole event.

Although the final make-up of the rounds is yet to be locked in, the TCM and GT categories are expected to run with two and four Nationals events respectively.

The move will mark a return to the Nationals for the GTs, who have expressed a desire to run a twin 1 Hour race format not available to them on the V8 Supercars card (CLICK HERE for Speedcafe.com’s previous story).

According to Shannons Nationals director Rob Curkpatrick, the two new classes will add an extra element of excitement to next year’s events.

“We’re really happy to have the GTs and the Touring Car Masters on board,” Curkpatrick told Speedcafe.com.

“Both classes showcase great cars, and we’re looking forward to working with the people that run them.

“The GTs and Touring Car Masters really complement our existing classes, and what we do and how we do it obviously has some appeal with them as well in terms of format flexibility and guaranteed track time.”

Having last visited Queensland Raceway in 2007, Curkpatrick added that the resurfacing of the Ipswich circuit instigated a push from competitors for a return.

“We’ve always been keen on having a presence in Queensland, and returning to QR is great for us,” said Curkpatrick. 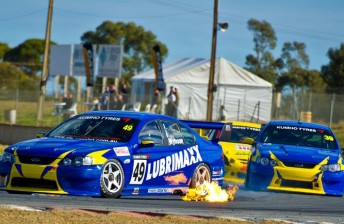 “We’ve been very happy at Morgan Park, but our competitors were wanting the opportunity to run on the new surface at QR, and the track is really keen to have us back as well.”

The GT Championship won’t be the only class running an extended race format with the Nationals next year, with the Porsche GT3 Cup Challenge and Radical Australia Cup expected to continue with their Jim Richards Endurance Trophy and twin 50 minute race formats respectively.

The Kumho V8 Touring Car Series is set to run a longer, most likely 25 minute, third race at each round, using a cumulative grid from the results of the opening two races. The category’s growth this year has also prompted an increase from five to six rounds.