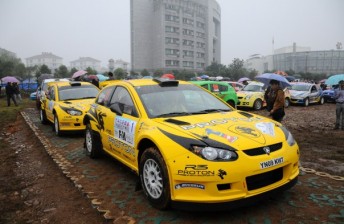 The Proton team prior to the start in China

Proton’s Alister McRae has got off to the ideal start in the Asia Pacific Rally Championship’s China Rally by winning the opening Friday evening super stage.

The 2011 APRC drivers title will go to one of the Proton drivers, but the battle for the manufacturers title is all on, especially if either Ketomaa and Sungkar keep up their current pace.

Proton leads the manufacturers title points, but Mitsubishi is only 6 points behind.