Jim Richards Trophy to return in 2012

Jim Richards Trophy to return in 2012 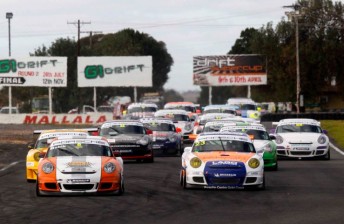 The 2012 Jim Richards Endurance Trophy will kick off at Mallala

The Jim Richards Endurance Trophy will return for a second season in 2012, Porsche GT3 Cup Challenge organisers have confirmed.

The trophy was introduced to the Shannons Nationals presented by Hi-Tec Oils class this season, rewarding the driver who scores the highest points across three longer races held throughout the season.

Next year will see the third race from the Mallala, Winton and Queensland Raceway rounds count for the trophy, which in 2011 was won by Roger Lago.

According to Porsche motorsport manager Jamey Blaikie, the Jim Richards Endurance Trophy proved a popular addition to the calendar.

“We enjoyed a lot of positive feedback to the Jim Richards Endurance Trophy from our competitors, the media and the fans this year,” Blaikie told Speedcafe.com.

“Next year marks 20 years since Jim Richards first became involved with the Porsche brand, and we’re delighted to continue to recognise that association with the Trophy.”

The 2012 GT3 Cup Challenge will kick off at Mallala in April next year, and conclude at Phillip Island in September.

The class will visit Winton and Queensland Raceway for the first time – a move which Blaikie says will provide all competitors with a level playing field.

“The Shannons Nationals have put together a great calendar for next year, and it’s great for our guys to have the opportunity to race at some new venues,” said Blaikie.

“It’ll be a level playing field for everyone, especially with the resurfacing that is currently being undertaken at Queensland Raceway.

“The GT3 Cup Challenge is really about providing a place for Porsche owners to race against their mates, and Porsche looks forward to building on what has been a great 2011 season for the class.”

See below for the 2012 GT3 Cup Challenge calendar