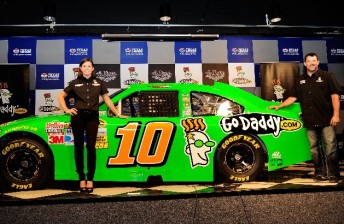 Danica Patrick and Tony Stewart with the former's new ride

Stewart-Haas Racing has confirmed that Danica Patrick will compete in 10 NASCAR Sprint Cup races in 2012, beginning with the season-opening Daytona 500.

Patrick had previously announced a full-time switch from the Izod IndyCar Series to NASCAR’s Nationwide division with JR Motorsports for next season.

The deal with Stewart-Haas is also expected to see the 29-year-old compete at Darlington, Bristol, Atlanta, Chicagoland, Dover, Texas and Phoenix.

Patrick was on hand to make the announcement at Texas Motor Speedway, where she is competing in her 10th Nationwide race of the season.

“I’m excited,” said Patrick, who made her NASCAR debut at Daytona in the ARCA Series in 2010, before competing in the Nationwide race at the Florida venue last year.

“There’s a lot I’m worried for but on the other hand as I’ve kind of felt it with my Nationwide races so far is that – and in particular with the most difficult tracks – expectation levels are sometimes not quite as high. So you have the ability to make mistakes and that’s the plan.

“There’s going to be mistakes and there’s going to be learning curves to get that out of the way before we try and do this full-time, (but) it’s about making the most complete future possible with the limited schedule of experience.”

“We took the whole schedule and took races that we thought would be really challenging for her and to pick tracks she needed to put emphasis on,” said Stewart.

“We’re keeping two dates open to see how the start of the season goes and make sure we can call an audible if we need to.

“If we see a place or Danica feels like there’s a track that she struggled at, we have that flexibility to plug them in. But we will run 10 full races with her.”

Patrick, who has yet to test a Cup car, will have to qualify for the Daytona 500 either on speed or via the Gatorade Duel races.