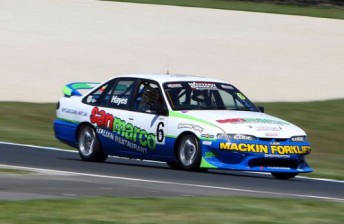 Matt Hayes will look to steal the title from Beechey

Adam Beechey and Matt Hayes will enter the final day of the 2011 Commodore Cup National Series equal on points after the latter took pole position for Race 1 at Phillip Island.

The point earned for pole sees Hayes locked together with the reigning series winner on 629 points ahead of three races tomorrow.

“I’m really pleased. The car feels good and we’ve found more speed as the weekend has gone on,” said Hayes.

“It’s completely level with Adam for the championship so all we have to do is finish in front of him in every race, though it won’t be easy. It’s going to be really competitive but we’re in a good position.”

The Kerrick Sports Sedan National Series also completed qualifying for the final round of its season at Phillip Island today, with Tony Ricciardello taking pole by just 0.06s from Darren Hossack.

The forced abandonment of Race 1 for the Australian Superkart Championship was a blessing for reigning champion Darren Hossack, who was destined not to make the grid while his team rebuilt a blown engine.

Russell Jamieson had topped qualifying earlier in the day from Warren McIlveen and Jason Smith.

CLICK HERE for Speedcafe.com’s report from Race 1 of the Formula 3 Australian Drivers’ Championship at Phillip Island

CLICK HERE for Speedcafe.com’s report from Race 1 of the GT3 Cup Challenge at Phillip Island