Andreas Mikkelsen on top in Cyprus

Andreas Mikkelsen on top in Cyprus 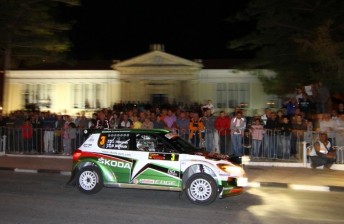 Andreas Mikkelson has a handy lead in Cyprus

Andreas Mikkelsen has completed a dramatic opening day of the Cyprus Rally leading the Intercontinental Rally Challenge (IRC) qualifier and firmly on course for the coveted title in his Škoda UK Motorsport Fabia Super 2000.

The 22-year-old started Friday’s opening test with a 3.1-second advantage and that margin to 8.0s with the quickest run on stage two only for a spin – and a charging drive by Thierry Neuville – to drop him behind his Team Peugeot Belgium-Luxembourg title rival on the very next test.

But second became first when Neuville suffered a right-rear puncture on stage four before he was slowed by an alternator fault that would ultimately force his retirement from the day.

However, there were no such problems for Mikkelsen who charged to an overnight lead of 20.7s.

“It’s been a really good day for us and I have to be very happy,” said Mikkelsen.

“But there’s a long way to go and day two will be difficult. I need to do everything to keep Nasser behind me if I am to win the title.”

But while Mikkelsen reflected on a strong opening day held in glorious Cypriot sunshine, defending IRC champion Juho Hänninen was left to rue a “stupid mistake” that caused him to crash on the second corner of Friday’s first test and end his hopes of a second title in a row.

“I was too fast for the corner, ran wide and rolled,” said Hänninen.

“We thought we had a driveshaft problem this morning but it was actually a problem with the front differential, which we repaired,” said Al-Attiyah.

“It will not be easy to close the gap to Andreas but I will try my best.”

Freddy Loix, one of five IRC title contenders prior to the start, struggled to make an impact in his BFO-Škoda Rally Team Fabia. The normally rapid Belgian hadn’t driven on gravel stages for three years and lacked the cutting edge needed to threaten the podium positions on the loose-surface sections, although a spin on stage five didn’t help his cause. He is fourth overnight, 1m41.2s behind Mikkelsen.

Saturday’s action features three repeated stages north-east of the rally base in Pafos.