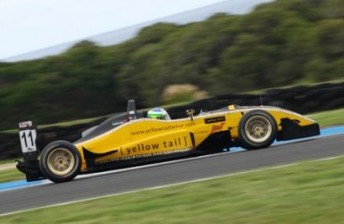 Sydney based racer Matt Sofi is aiming to repeat his dominant Eastern Creek performance upon his return to the Formula 3 Australian Drivers’ Championship this weekend at Phillip Island.

A former regular in the class, Sofi will compete both this weekend and at the Symmons Plains season finale after a late sponsorship deal between car owner Sam Astuti and Australian winemaker Yellow Tail.

The 26-year-old Sofi won all three races earlier in the year at Eastern Creek, and looks likely to challenge title contenders Chris Gilmour and James Winslow in his Honda powered Dallara at the Victorian venue.

“We hadn’t planned on doing any races outside of Eastern Creek, but from the success we had there Sam was able to attract a great sponsor in Yellow Tail wines for the final two events of the year,” Sofi told Speedcafe.com at the Shannons Nationals presented by Hi-Tec Oils event.

“I literally got the call only a week or two ago to say it’s finalised and it’s done, and I’m rapt to be here.

“The fact that it’s Phillip Island as well is a big bonus. We’ve been fast here in the past but a bit unlucky, so we’re very keen to get a good result and continue what we had going at Eastern Creek.”

While continuing to be pressed by business commitments, Sofi says that the strength of next year’s Formula 3 calendar may instigate another tilt at the full championship.

“If we can get the funding we’ll try and do the whole year, but at this point we don’t have anything confirmed so we’ll try and work on that over the off-season,” said Sofi. 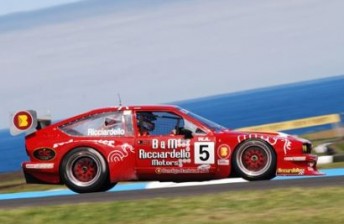 “The calendar for next year looks pretty attractive, with Clipsal being announced today (CLICK HERE for separate story), as well as Bathurst and a couple of other V8 rounds, so we’ll try our best to get on the grid.”

Official practice will kick-off tomorrow morning, with qualifying and the first four races of the weekend to follow.