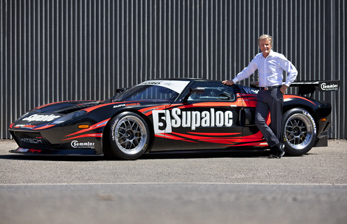 Kevin Weeks with his Ford GT

Supaloc Racing has revealed the Ford GT that Kevin Weeks will drive in the 2012 Australian GT Championship.

The distinctive Supaloc Racing livery has been combined with the low-slung lines of the GT.

The Ford GT is powered by a thundering 5.3 Litre V8 engine (producing around 417kw of power and 700Nm of torque), driven through a six-speed sequential gearbox.

This will be the only Ford GT competing in the 2012 Australian GT Championship, and it is in fact the last example that has been produced.

In the months before the opening round of the 2012 Australian GT Championship, the Supaloc Racing Ford GT will be subjected to a full simulation and test program. The team has already started work on the car simulation model and has planned an extensive pre-season test program. Areas the team will focus on include fine tuning kinematics and suspension dynamics, as well as the aerodynamic characteristics of the car’s unique body. Other areas of investigation will include Michelin’s new control tyre compound, which will be modelled in simulation.