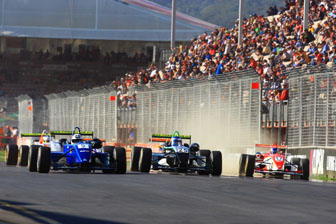 Formula 3 and Carrera Cup will make their return to the streets of Adelaide in 2012.

After being left off the card since 2009, the Formula 3 Australian Drivers Championship will contest its opening round at the famous Adelaide track.

The event will be the first time that F3’s new-generation 2012 cars will be eligible to compete.

Event organisers have promised a selection of strong young talent – both from Australia and overseas, including a possible two-car entry from an Asian-based team.

For the Porsche City Index, it will be the first time since 2008 that the category has raced at the Clipsal 500.

Having been there from 2004, the class missed 2009 and 2010 while the category took its sabbatical. This year, Carrera Cup elected to open its championship at the Australian Grand Prix, but now that it has firmly asserted itself back in the Australian racing market, Carrera Cup will again kick off its series in South Australia.

“The Clipsal 500 is one of Australia’s premier sporting events and the perfect stage to showcase the exciting racing action of Carrera Cup,” said Blaikie.

“With a crowd of almost 300,000 every year, the Clipsal 500 is constantly one of the most exciting and entertaining sporting events in the country.

“For 2012, Carrera Cup is looking forward to once again being a part of the on-track action through the streets of Adelaide.”

F3 and Carrera Cup will be joined by a stellar line-up of support classes, including the Fujitsu V8 Series, Touring Car Masters, V8 Utes, Australian GT and Aussie Racing Cars.