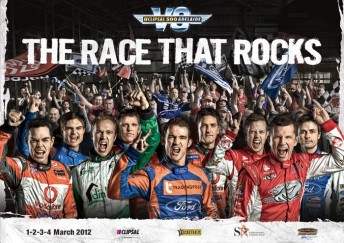 The South Australian Motor Sport Board has launched the 2012 Clipsal 500 with a new advert campaign.

The Clipsal 500 will be held on March 1-4 – the opening event of the V8 Supercars Championship.

The Clipsal 500 Adelaide’s promotion will use the moniker ‘The Race That Rocks!’ with the new TV campaign launched featuring the majority of V8 Supercars in a foot stomping, hand clapping chant.

Fifty fans were also involved in the filming and photo shoot to help create the campaign.

On-track, the biggest change for the teams will be a return to Friday qualifying where both qualifying and the top 10 shootout will be held on Friday afternoon.

Besides Bathurst, it is the only race meeting that will have qualifying held on Friday, rather than Saturday.

At the launch of the 2012 Clipsal 500, Jack Daniel’s Racing’s Rick Kelly says that he is pleased to see the event return to the opening event of the championship.

“I’m excited to have the Clipsal 500 as the opening event for us,” Kelly said.

“At the end of each year, there’s always lots of change with teams, drivers and sponsors. It’s always interesting to head to the first round and see where everyone is placed and see how they perform.

“The first round being in Australia is a great opportunity for the local crowd to get down and check it out.

“It’s one of my favourite events. A Clipsal win is second only to Bathurst.”

Seven support categories have been confirmed, including the Fujitsu V8 Supercars Series, Australian GT, V8 Utes, Touring Car Masters, Carrera Cup, Formula 3 and Aussie Racing Cars categories all on board for the 2012 event.

Tickets for the March event are on sale now through Ticketek.