Brabham aims to end FIA GT season on a high

Brabham aims to end FIA GT season on a high 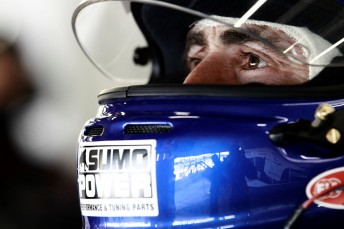 David Brabham is aiming to finish his debut FIA GT1 World Championship season on a high in South America this weekend.

After 18 races across eight countries, the final round is being staged at the Potrero de los Funes circuit near San Luis in Argentina.

Having enjoyed several podiums this season, Brabham and his teammate, Englishman Jamie Campbell-Walter, want to win this weekend.

“The team has worked really hard all year, but Sumo Power GT are yet to win a race this season,” said Brabham.

“Jamie (Campbell-Walter) and I have finished on the podium four times, so we have proved that the car – and the crew – has the pace, but the top step has so far eluded us.

“I think the circuit will suit the car and I’m sure we can be competitive.

“Our goal is to achieve our first victory and end our season on a high note.”

The Potrero de los Funes circuit is a semi-permanent track that is used by locals throughout the year. Similar in length to Bathurst, it is fast flowing and undulating with many high speed corners. Having not raced there before, Brabham hit the simulator to get a feel for what lays ahead.

“The circuit at San Luis is another I haven’t been to this year, but I can see from photos and from the internet that it’s a beautiful place,” said Brabham.

“The other drivers really rave about it, so I’m very much looking forward to it.

“I have recently been to ‘Base Performance’ and had a session on the simulator to learn as much as I can about the track before I get to Argentina.

“I’m sure this will help me get up to speed more quickly.”

Having made his GT1 debut with the Sumo Power team this year, Brabham has not only enjoyed the series, but he has also enjoyed the competiveness of the racing.

“We’ve picked up some thirds and had a great shot at winning one of races in Spain.

“I’ve also really enjoyed my time with the team; it’s been a really enjoyable season of racing.”

Brabham and Campbell-Walter are currently placed ninth in the drivers’ standings. If they win both of the weekend’s one-hour races they have a mathematical chance of claiming third place.

Practice and pre-qualifying for the Argentinean round of the FIA GT1 World Championship begin today, followed by qualifying and race one on Saturday, before the main championship race on Sunday (Argentinean time).