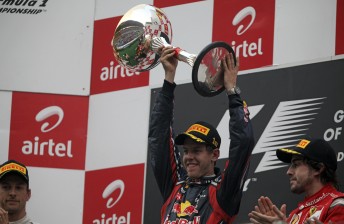 Sebastian Vettel has taken out the Castrol EDGE Rankings Race for 2011 with two Grands Prix to go in the season.

The German Red Bull racer has been dominant in the Rankings since its inception last year and has gone through the 2011 season without anybody heading him.

In this monthly Castrol EDGE Rankings wrap, IndyCar star, Dan Wheldon is remembered by the numbers that defined his career – and the question is asked – will Jimmie Johnson finish the NASCAR season on top of both the Rankings and the NASCAR Sprint Cup Title Chase?

Q. Another outstanding month for Vettel saw him win consecutive Castrol EDGE Rankings and Formula One World Titles. How does his performance in 2011 compare to some of the best championship-winning campaigns in F1 history?

Comparing past and present Formula One seasons, and champions, can often be a difficult process. Not only has the points system changed several times, but the number of races has steadily increased – meaning statistics like the number of wins in one season are weighted in favour of current performers rather than their predecessors. A more accurate comparison is made possible by the Castrol EDGE Rankings however, which takes into account season length and is not influenced by the points on offer. Using the complex algorithm which powers the Rankings, it is possible to take Vettel’s campaign up to the point he secured the title at Suzuka, and compare it with past greats like Jim Clark, Jackie Stewart and Michael Schumacher in order to assess who has had the greatest title campaign in F1 history.

In clinching the title in the 15th round of a 19-race calendar, Vettel racked up nine victories and 12 pole positions, leaving him with a Rankings score of 23,395 points. Taking the same point of the season – 15/19ths of the total number of races, that put Vettel third in the all-time greatest campaigns list. Nigel Mansell’s 1992 campaign, which saw the Briton take nine wins and 14 poles on his way to the title, was second with 25,586 points. Perhaps fittingly though the greatest title campaign belongs to Michael Schumacher (34th), who amassed 25,596 points in 2004. The German won the first five races, was hit and crashed out at Monaco, and then won the next seven straight Grands Prix. Interestingly Vettel could have bettered Schumacher’s total if he had won at Suzuka, but he finished third and ended in the same position in the all-time greatest seasons according to the Castrol EDGE Rankings.

Q. NASCAR driver Carl Edwards currently heads his fellow Sprint Cup drivers in the Castrol EDGE Rankings and the Chase for 2011, what are the chances he will end the season ahead in both?

This year’s NASCAR Sprint Cup Chase had proved unpredictable, not least because the customarily dominant force of Jimmie Johnson has not been able to replicate the sort of form which has carried him to the past five consecutive titles. Johnson’s struggles are reflected in an all-time low Rankings of 13th. Instead the dominant – or at least most superior – force this year has been Roush Fenway’s Carl Edwards (8th), who currently leads the Chase and the NASCAR Rankings order.

Whether Edwards can stay ahead in the Chase and seal the title remains to be seen over the next three races. He certainly has the pace, but a slender eight-point advantage over Tony Stewart (21st) in second – and the fact the top six, from Edwards down to Johnson, are separated by just 43 points – means anything could happen in the remaining three races.

In the Rankings, Edwards’ position is more secure. A low total to defend from Texas last year means he is likely to gain ground in this year’s visit to the circuit. Kyle Busch (12th) and Johnson, his two nearest rivals in the Rankings, also stake relatively low totals, but Edwards’ current advantage of almost 2,000 points is unlikely to be eroded – and if he can preserve that margin heading into the final two rounds then he will be all but guaranteed to finish top in the NASCAR Rankings.

Q. October saw the tragic loss of IndyCar driver Dan Wheldon. What does the Castrol EDGE Rankings show us about the popular driver’s career?

Tributes from family, drivers, friends and fans poured in for Dan Wheldon after he was tragically killed in the Las Vegas IndyCar season finale. As his father Clive mourned a ‘devoted son’, the motorsport community paid tribute to a true legend and, as 2009 F1 world champion Jenson Button put it, ‘a great guy’.

In tribute to Wheldon, the Castrol EDGE Rankings looks at some of the numbers behind an outstanding career which was tragically cut short.

1 IndyCar championship, which Wheldon dominated in 2005
2 Indianapolis 500 wins – in 2005 and 2011. He also took five podiums in the race, a record only matched by Helio Castroneves since the American open wheel split
4 The age he started karting, having inherited his love of motorsport from his father, a keen amateur, and his mother, a timekeeper at their local track
19 The age he moved to the US to pursue his dream. He would find his home, and later his family, there
37 Wins over his single seater career, stretching back to his first win in Formula Vauxhall in 1996. It was his maiden season, and he won from pole position in only his second race
43 IndyCar podiums
60 IndyCar races led
93 Top 10 finishes in IndyCar
1,848 The points he scored in his best race according to the Castrol EDGE Rankings. Fittingly it came at Nashville in 2006 – Wheldon qualified on pole and set the fastest lap, but lost out on the win as team-mate Scott Dixon pipped him by just 0.1176s. Typically, Wheldon was the first to congratulate Dixon
6,981 Kilometres lead in IndyCar
14,623 Points he scored in the Castrol EDGE Rankings over his 2005 season. Wheldon won four of the first five races, while victories at Pikes Peak and Chicago toward the final cemented his victorious campaign. Only once during the entire season did he not lead the championship

Q. Who were the biggest movers in the Castrol EDGE Rankings during October and why?

One of the biggest movers of October was Holland’s Renger van der Zande, whose DTM exploits led to a jump of 98 places over the month. That was despite being disqualified in the penultimate round at Valencia, where he had qualified a season’s best third. Van der Zande raced under protest after stewards deemed his car not to be in compliance of the laws, finishing fifth, but was later disqualified. He still scored well in the Rankings due to his qualifying performance however, and cemented his gains with another strong weekend in the finale at Hockenheim, where he qualified 14th and finished 12th. Such performances boosted him 98 places in the Rankings during October, lifting him to 236th as a result.

Another strong performer was Nicolas Minassian, who took a podium in ALMS Petit Le Mans. Starting from fifth, the 38-year-old Frenchman and his team-mates Nicolas Lapierre (206th) and Marc Gene (185th) worked their way up to second as the chequered flag fell in the Team ORECA Peugeot. Minassian’s gains were exaggerated by the fact he had no previous rounds to drop under the rollover system, and he consequently leapt from 383rd – his position before October – to end the month 218th in the Rankings, a gain of 165 positions.

Q. How did the Castrol EDGE Grand Prix Predictor perform in October?

October was a strong month for the Castrol EDGE Grand Prix Predictor, with scores of over 30 points in all three Grands Pix – only the second time this season it has managed such a run. Things started well at the Japanese Grand Prix, where it scored 37 points despite the absence of a single perfect score for any of its podium selections. Maximum hauls for Mark Webber in fourth and Lewis Hamilton in fifth saved the day however, lending The Predictor its joint fourth-highest tally for the year.

In Korea it again scored two perfect predictions – for Sebastian Vettel to win and Felipe Massa to finish sixth – while six two-point hauls took its tally to 32. Both those scores were bettered by its performance at the inaugural Indian Grand Prix however, as The Predictor gained three perfect scored and equalled its second best-ever haul of 45 points. That could have been even higher as it scored maximum hauls for Sebastian Vettel to win and Jenson Button to finish second, but missed out on its first 30-point podium bonus by backing Lewis Hamilton for third – the Briton finishing down in seventh following a clash with Felipe Massa.

Q. With no past form to analyse, how did the Predictor calculate its forecast for the Indian GP?
The inaugural running of the Indian Grand Prix posed many new questions and potential scenarios for teams, drivers and the F1 community at large, as they entered unknown territory. The Predictor too was dealing with the unknown, with no previous races on the Buddh International Circuit to incorporate into its complex algorithm. As a result its forecast for the Gand Pix was based largely on each driver’s previous form over the past races of 2011 – a statistic it always considers, but which took on increased importance given the fact India was new to the F1 calendar.

Q. Who looks likely to come out on top of the expert panel come the end of the season?
Heading into the final two races of the year, honours in the Castrol EDGE Grand Prix Predictor Expert panel look increasingly like being fought out between triple WTCC champion Andy Priaulx and sportscar ace Darren Turner. Priaulx leapt into the lead after Suzuka and Korea, as three-time Grand Prix winner Johnny Herbert lost ground. Turner meanwhile closed in on Priaulx after India, with just four points separating the pair at the top of the table.

Herbert is by no means out of it however, trailing by just 30 points, while AUTOSPORT’s Edd Straw and Jonathan Noble – 57 and 79 points in arrears respectively – could still triumph with outstanding performances in the final two weeks. So while Priaulx and Turner are favourites, all five Experts are still in mathematical contention for glory – which means should any one of them break the Expert panel’s duck and collect a 30-point podium bonus, they could suddenly find themselves leading heading into the home straight.