Carlos Sainz back in WRC machinery

Carlos Sainz back in WRC machinery 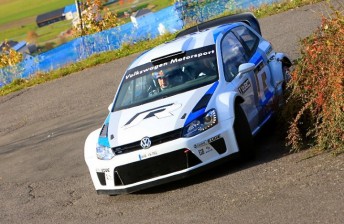 The 1990 and ’92 World Rally Champion has taken the wheel of the development Volkswagen Polo R WRC in first test sessions on closed public roads on the narrow country lanes in Veldenz in Germany.

‘El Matador’ has been part of the VW family since 2006 spearheading its Dakar assault, including victory in 2010 event in South America in the Race Touareg TDI.

When Volkswagen announced its WRC entry for 2013 back in May motorsport director Kris Nissen said that he needed “10 seconds” to convince Sainz to remain part of the company’s efforts in the new programme. It was confirmed that Sainz would be part of some testing of the new car along with fellow veteran Dieter Depping.

As well as using the experienced Spanish and German drivers, VW is also expected to call on the services of other rally legends throughout the development process.

Few official details were released about the test with the Wolfsburg factory confirming further asphalt and gravel sessions would continue in the coming months.

The signing of any official drivers would not be announced until the after the final round of this World Rally Champion’s final event in Wales (10-13 November). It is believed 2003 World Rally Champion Petter Solberg is the most likely candidate for the position as lead driver. VW has showed its intentions of running a younger team-mate by backing of number of drivers in its sister company’s Skoda S2000 Fabias on selected events over the past few months.

Check out the video from the test