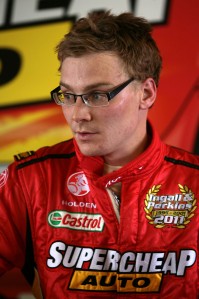 Jack Perkins will make a return to the FW1 Aussie Racing Cars Super Series at Symmons Plains, Tasmania, next weekend.

Perkins, currently third in the Fujitsu V8 Supercars Series, will drive one of the pint-sized machines around the 2.4km circuit against the strong pack of regular contenders.

Perkins is no stranger to the class, having won races and rounds in the cars in the past.

He told Speedcafe.com that he jumped at the opportunity to have his first drive for 2011.

“Driving Aussie Racing Cars is the best fun you can have with your clothes on,” Perkins joked.

“With no Fujitsu Series on in Tasmania, it’s a nice opportunity for me to race and be in amongst the V8 paddock for the weekend.

“I have to thank Brad, James and Phil Ward for letting me have a skid in one of their cars again. They are a lot of fun and it’s very competitive.”

Other drivers returning to the class include former series champion and Tassie local Adam Gowans, plus female racer Hayley Swanson.

“Championship points are exceptionally close coming into this round,” the said.

“At this stage, the top three drivers are separated by only six points and anyone in the top five could take home the title. Symmons Plains will be critical for all those involved.”

The FW1 Aussie Racing Cars will support the Falken Tasmania Challenge for V8 Supercars on November 11-13.