Pringle leads the charge in the Dash for Cash

Pringle leads the charge in the Dash for Cash 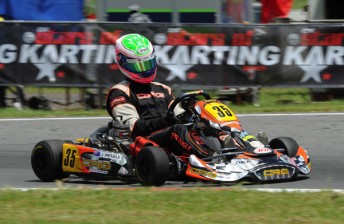 Victorian Jason Pringle, winner of the final round in the 2011 CIK Stars of Karting Series, will be in Kalgoorlie this weekend. Pic: AF Images/Budd

Victorian Jason Pringle, who won the final round of the Castrol EDGE CIK Stars of Karting Series last month, will lead the ‘Eastern Invasion’ in Kalgoorlie’s prestigious Dash for Cash karting event this weekend.

Pringle will headline stellar field of KZ2 Gearbox competitors in the Rollasole KZ2 Invitational, for the first time some of the best rising young stars who will battle for the Meritus.GP KF3 Cup across the weekend in the Western Australian mining town.

In addition to the ‘premier’ categories, there will also be drivers from as young a seven and as experienced in life as over 40, competing across many other classes catering for a variety of ages, weights and engine capacities.

There will be in excess of $70,000 of cash and prizes given away across the event, including a $5,000 prize for the winner of the Rollasole KZ2 category in the 30-lap main event on Saturday night.  The winner of the Meritus.GP KF3 Cup will also receive the opportunity to complete a two-day test with Meritus racing in the JK Racing Asia Series car in Sepang.  There is a minimum of $1,500 prize money for all classes at the event.

“The Dash for Cash event is continuing to develop into not only a great event for Western Australian drivers but also competitors from all across Australia,” said Eastern Goldfields Kart Club’s Rosalie Gough.

“Throughout the years the club has worked hard on building this event into a ‘must attend’ on the karting calendar.  With the recent addition over the past couple of years of the higher profile classes we’ve attracted some good interest from drivers in the Eastern states.

“While a lot of the focus is on the two ‘high profile’ classes, this event is one that is built on the tradition of providing something for all karting competitors and this is highlighted by the great prizes across the board.”

While many of Australia’s best drivers will be in attendance, including the winner of the CIK Stars of Karting Series final round Jason Pringle, it is unfortunate that European gun, Roberto Toninelli, has been forced to withdraw from the event due to the QANTAS disruptions from earlier in the week.

“It is very unfortunate that Roberto, who won the 2010 event, is unable to make it out here.  He was a huge fan of the event last year and extremely excited about coming back this year but unfortunately he isn’t going to be able to,” said Rollasole KZ2 Invitational co-ordinator Michael Patrizi.

“We’ve got some of the best drivers from all across the state and a number of Australia’s top drivers coming, so they’ll still put on a great show reaching speeds in excess of 120 km/h.”