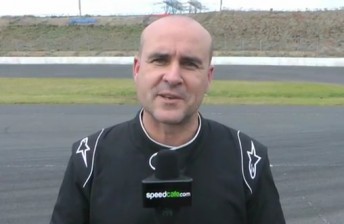 Daryl Beattie was one of the world’s fastest motorcycle riders, and now, he is one of Australia’s most well-known motorsport commentators.

Beattie, winner of three 500cc motorcycle Grands Prix in the mid-1990s, was struck down by numerous injuries during his career and eventually retired from bike racing in 1997.

Despite a two-race foray into V8 Supercars racing, Beattie turned his hand and head to TV – now hosting Network Ten’s Formula One Grand Prix and MotoGP coverage, as well as the network’s magazine-style program RPM.

In this edition of Jack’s 10 Questions, Speedcafe.com speaks to Beattie about his bike racing career, his retirement, his favourite holiday destination and one lady who took her love for Daryl just a little too far …

See below for Jack’s 10 Questions with Daryl Beattie.