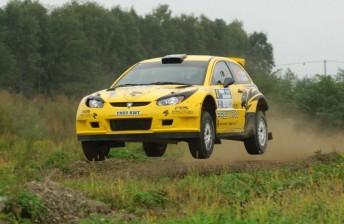 Chris Atkinson wants to leap ahead of Alister McRae in China

Australia’s Chris Atkinson will need to beat his Proton team-mate Alister McRae at this weekend’s China Rally if he is to win the Asia Pacific Rally Championship.

Atkinson has been the dominant force in the APRC, but mechanical issues in Queensland in May and more recently in Japan have been in contrast Malaysia, New Caledonia and New Zealand where he took victory.

The APRC driver’s title is already in the bag – all that’s left is finding out which of the two Proton drivers is to be this year’s champion. McRae currently leads the championship with 116 points, a mere seven points ahead of Atkinson.

Still up for grabs is the APRC manufacturer’s title with Proton just six points behind Mitsubishi, while a distant third is Subaru.

“China is going to be extremely competitive,” said Atkinson.

“Given its rough and challenging terrain, the enormous number of entries and especially the high level of competition. And you can bet that the boys in Mitsubishi will be going all out to clinch the title.

Perth-based Scotsman McRae has also been on the pace, and just as important has been his ability to complete events in his Satria Neo S2000.

“Whatever the outcome, Chris and I already have a strong reason to celebrate in that Proton has come out on top this season,” said McRae.

“The Satria Neo S2000 has been dominant in this year’s APRC, winning three out of five rallies so far as well as securing two second-place and two third-place finishes.”

McRae and Atkinson have every right to feel confident heading to China after a one-two finish in the rally last year.