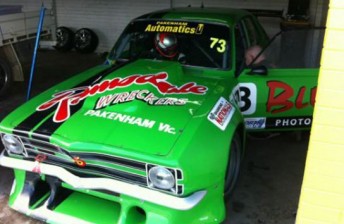 The 500bhp Torana that Gray will drive

Victorian driver Lauren Gray is expected to become the first female driver to contest a round of the Kerrick Sports Sedan National Series when she takes to the track at Phillip Island this weekend.

Gray will step behind the wheel of a Holden Torana XU1 Sports Sedan at this weekend’s Shannons Nationals presented by Hi-Tec Oils event, having made her debut in the Gary Roberts-owned car at Phillip Island’s Victorian State Series meeting a fortnight ago.

Gray is using her time in the Sports Sedan to gain rear-wheel drive experience ahead of her debut as the lead driver for the newly formed La Femme Motorsport Academy – an all-female Aussie Racing Car team – next season.

“The more miles in any car I can get are good for me so this is a fantastic opportunity Gary and his team have given me.”

Gray said the 500hp Torana was fundamentally different to anything she had ever driven.

“It’s completely different to the Production Car, the F3 cars or anything else, for that matter,” said Gray.

“I learnt a lot at the state round two weeks ago and I know where to find more time when we come back this weekend, it was great preparation for contesting the National round this weekend. I’ve had to completely change my driving style to adapt but the car is really good to drive and the team has done a great job to prepare it so well.”

Ricciardello recently clinched a record seventh National title at Morgan Park and has dominated this season in the absence of a regular challenge from long-time rival Hossack.

Gray said she was under no illusions about mixing it with the series regulars at the front of the field.

“I’m not there chasing results –I’m there chasing lap time. All we want to do is improve and get quicker as the weekend goes on.”

The final round of the Kerrick Sports Sedan National series will be staged alongside the finale’ of the Shannons Nationals presented by Hi-Tec Oils at Phillip Island.