Could V8s join Superstars at Sentul in 2012?

Could V8s join Superstars at Sentul in 2012? 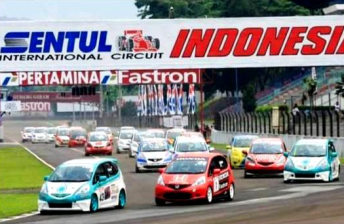 Could the V8 Supercars Championship race at Indonesia’s Sentul International Circuit next November?

The Indonesian option for the ‘TBA’ date set down in the 2012 V8 schedule has come to light after Italy’s Superstars touring car series announced today that it will host its final round on November 9-11 next year – the same date tabbed for a new, yet-to-announced international event in next year’s V8 calendar.

There has been much speculation regarding the TBA date on the 2012 V8 Supercars Championship calendar, with the only clue offered by V8 hierarchy that the race would be held in South East Asia.

V8 Supercars international director Martin Whitaker told Speedcafe.com on Tuesday that there would be no rush confirming the missing date on the 15 event calendar.

CLICK HERE for Speedcafe.com’s latest story on the 2012 calendar.

Whitaker could not be reached for comment today regarding the potential of a double-header with V8 Supercars and the Superstars Series at Sentul. Cars from the Italian-based Superstars Series

Both the V8 Supercars Championship and the Superstars Series are FIA-sanctioned categories, and recent upgrades at the circuit have guaranteed the presence of the Superstars class.

Pending final inspections, the track will improve its FIA rating from Grade 4 to Grade 2.

The circuit improvements include the laying of the latest generation asphalt and the implementation of a new chicane at the final corner.

The Superstars Series organisers also announced that local Indonesian racing hero Ananda Mikola will most likely take part in the race in the Sentul, and possibly the entire 2012 season.

The Sentul International Circuit was opened in 1993 and was intended to be the home of the Indonesian Grand Prix for Formula One – an aspiration its owners never achieved.

During the track’s first year, it held a demonstration race for the Australian Formula Holden Championship. The race was won by Mark Larkham.

In recent times, the Sentul circuit has also hosted events for A1 Grand Prix and GP2 Asia events.

See below for the 2012 V8 Supercars Championship calendar