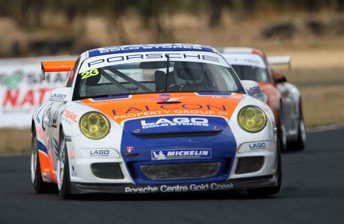 Roger Lago will farewell the Porsche GT3 Cup Challenge Australia class at Phillip Island this weekend with the #1 on his doors.

Lago, the reigning GT3 Cup Challenge champion, leads the series by 36 points over Jeff Bobik heading into the final round of the 2011 title at the Victorian circuit.

After this weekend’s race, Lago will leave the class, bound for the Vodka O Australian GT Championship in a Lamborghini LP600 GT3.

For his category swansong, Lago will bench his regular #23, replacing it with the #1 to honour his reigning champion status – and he hopes to add a second title.

“I’m running #1 this weekend, which I’m a bit superstitious about,” Lago told Speedcafe.com.

“This is the last time I’ll be able to run the #1 on that car. I’ve had the option to run it all year, but I haven’t done that to date.

“I thought I’d run it this weekend, hopefully everything goes to plan and then I can put that to bed and then start to get in Australian GT mode and run around in the Lamborghini.”

While Lago heads into the Phillip Island round in the box seat, he isn’t taking Bobik’s challenge lightly.

“I have to circulate, not do anything silly and just collect the points I need.

“I’ve had a good, consistent year. We’ve been strong where we had to, and collected points when we can. I can’t complain at all.

“Jeff has done more miles than me at Phillip Island, and he is pretty quick in that car of his. But the pressure is on him – he has to win and hope that I don’t finish or finish well down.”

The event represents the final round of the 2011 Shannons Nationals presented by Hi-Tec Oils.