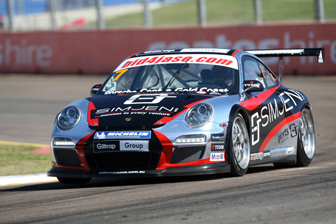 The Carrera Cup competitor drove Webb’s Falcon in a one-off test, aiming at competing in the endurance races next season.

Speedcafe.com’s Grant Rowley caught up with Reid to speak about his test, his future in Australian motorsport and his 2011 season in Carrera Cup.

SPEEDCAFE: You got to drive Jonathon Webb’s V8 Supercar at Queensland Raceway. How did it go?

JONNY REID: I was very happy with the way things went.

I’m still trying to break into the series full time, and I’ve been chipping away at that slowly but surely. 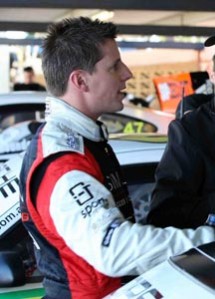 As for the test itself, I think both sides were very happy and it showed me how much the cars have evolved over time. I did a few runs in the Kelly cars last year, and that was a great experience, but most of my running was a few years back.

This was the first time that I drove a Ford as well. The car was great to drive. I felt right at home, pretty much after the first few laps and I was able to belt out some reasonable times on the tyres we were on.

SPEEDCAFE: How many laps did you get?

REID: It would have been just over 35, so it was quite a decent run in the car.

SPEEDCAFE: How much does this test point you towards your desire to be in the V8 Supercars Championship full-time?

REID: Yeah, absolutely. I’m pointing my whole career there. Some people have asked if I’m keen, and coming and doing Carrera Cup in Australia this year has really cemented that feeling.

Last year, it was really difficult for me to break into Australian motorsport. I went across to Europe to do some single-seater racing, and that was not my main focus, but it was an opportunity I couldn’t turn down at the time.

Right now, my focus, as it has been for the last three years since A1GP, is to get a full-time career going in the V8 Supercars Championship. This test is a step forward and it would only mean the endurance drives with the Mother Energy team next year, but I’m looking for more than that in the future.

Certainly, this is a huge start and a huge step in the right direction for me.

SPEEDCAFE: There are still a couple of seats available with a small number of teams in next year’s V8 Supercars Championship. Have you looked at those, or is it more about enduros next year, full-time gig in 2013?

REID: This test was just that – a chance to test. I haven’t committed to anything for next year yet.

I need to sit down, take a breathe and see what’s going to be best for myself moving forward.

Obviously, a full-time seat would be a priority, but second best is an endurance seat. Either way, I’m keen as mustard to get involved.

A full-time role, sometime in the future, is vital for me.

SPEEDCAFE: You’re fourth in Carrera Cup, and your title hopes slipped away after a clash with your McElrea Racing team-mate (Michael Patrizi) on the Gold Coast …

REID: Yeah, what can I say? As a team, we were embarrassed about the situation. It destroyed my championship hopes, and there was disappointment from Michael’s side, and I was disappointed with Michael as well.

But it was one of those things. It was racing. Tension can build within the team, and maybe in this scenario, it all came to a head at the Gold Coast.

From my point of view, I’m keen to get on with it and pull forward. You don’t gain anything unless you are working as a team. We’ve just got to put that disappointment behind us. It’s a shame and not an ideal situation for us to be involved in.

SPEEDCAFE: So what happens next year? If you can’t race V8s full-time, would you do Carrera Cup again? Fujitsu V8 Series?

REID: I’d do Carrera Cup again. The one-make series is fantastic. I wouldn’t rule out the Fujitsu Series as well, in some shape or form, if there were things that would help my career.

The beauty of Carrera Cup is that it is close, hard racing. I didn’t have too much trouble adapting from the Porsche to the V8, and every lap, I became more confident in the V8.

It doesn’t matter what you’re driving, as long as you are competing at a competitive level. For sure, from a career point of view, being in V8s is the ultimate, and I feel I can bring a lot of experience from all around the world and I’d certainly love the opportunity for a full-time steer and show what I can really do.

SPEEDCAFE: If you race again in Carrera Cup next year, would you like to stay with McElrea Racing?

REID: I’m very happy with the way things have been going at McElrea Racing.

If it does turn out that I stay in Carrera Cup, then I will be back with the same team for sure. I think that we’ve come a long way this year and it would be a waste to throw it away. The team is a strong unit and one of the best in the championship.