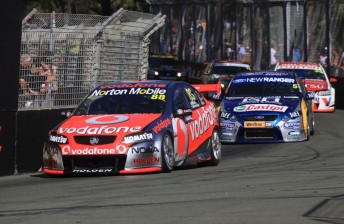 The V8 Supercars field on the Gold Coast

The location of the 2012 V8 Supercars Championship’s penultimate round may not be confirmed until the season has commenced, according to the category’s international director Martin Whitaker.

Next year’s calendar was announced at the Supercheap Auto Bathurst 1000 earlier this month, with 15 championship events including a TBA listed for the November 9-11 weekend.

“The TBA is there for a very good reason and frankly, there’s no hurry to announce that,” Whitaker told Speedcafe.com.

“We have a pretty good idea where we’re going to be, but these events don’t grow on trees and there’s an awful lot of hard work that goes on behind the scenes to make sure they happen.

“In all honesty, I’d rather buy a little bit of time now and get it right before firing shots.”

Linking with the Macau Grand Prix or creating a new event in Indonesia are believed to be among V8 Supercars’ most prominent options.

The 2012 Macau Grand Prix is scheduled for a week after V8 Supercars’ TBA date, and will again feature the FIA’s World Touring Car Championship as a support category.

“The Macau Grand Prix is an amazing event,” said Whitaker.

“They do a good job, and if there’s an opportunity we’d love to be there, but a lot of water has to flow under many bridges before we get there.”

FIA’s Asian Zone representative Wesley Wan however told Speedcafe.com that finding a space on the Macau support card, which also includes the annual Macau Motorcycle Grand Prix, would be difficult.

“Yes, they (V8 Supercars) could race at Macau, but the scheduling (is a problem). Macau is quite full and difficult to get a slot on the card,” said Wan.

“I don’t think they’ll be there next year.”