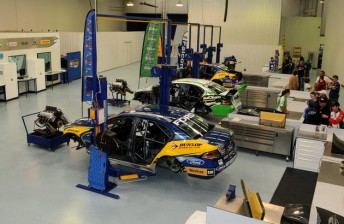 V8 Supercars is confident that its teams will be able to begin building the first Car of the Future race cars before Christmas.

With more than three months having passed since the first Pace Innovations built COTF prototype made its track debut, race teams are itching to get their hands on the final design drawings for the new cars ahead of a busy 2012 season.

Next year will see the championship teams needing to race and develop their existing equipment while building a fleet of new COTFs.

Teams have been gearing up for the new cars for several months, and received a package of Computer Aided Design drawings prior to the recent Armor All Gold Coast 600 to further assist their preparations.

According to V8 Supercars motorsport manager Adam Perry, the category plans to have all working drawings sent out by the end of the month.

“On the 12th (of November) the teams will get the next release which will be finalised CAD, and by the time we get to the end of November they’ll have everything they need to start manufacturing,” Perry confirmed to Speedcafe.com.

“The (control) rollcage has been approved, and we’re slowly chipping away on the sign-off of different pieces so the teams can go away and start to build.”

The COTF prototype testing program travelled to Eastern Creek last week, where the Holden Commodore made its debut alongside the Ford Falcon.

Tyre and brake testing will begin in earnest at Phillip Island on November 8, while more validation testing of the driveline is also on the menu before its specification can be finalised.

“The driveline we’re still holding out on,” said Perry.

“We’re probably just short of 4,000km on the driveline system. Transaxle wise we’re really pleased with what’s happening there, but we’re still working on a couple of issues with the tail shaft.

“But time is on our side there, the teams don’t need to have that tomorrow. We’ll run that out as long as we can, potentially up to August next year. The driveline is really important for us.”

Designed to reduce costs and entice new manufacturers into the class, the COTF represents an evolution of the current regulations.

The new cars will feature a common rollcage, Independent Rear Suspension, mid-mounted fuel tank and transaxle gearbox, while a V8 Supercars-branded common engine will be optional (CLICK HERE for the latest on the COTF engine program).