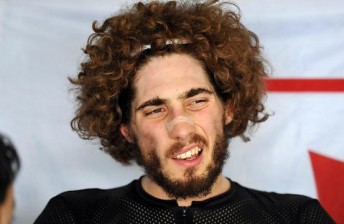 The father of deceased MotoGP star Marco Simoncelli has suggested a ‘minute of noise’ be held at this weekend’s final round of the championship at Valencia in Spain.

Paolo Simoncelli has requested a loud memorial event rather than the traditional minute’s silence.

Simoncelli died on just the second lap of the Malaysian Grand Prix when he fell in the path of the following bikes of Colin Edwards and Valentino Rossi.

“Next Sunday during the Valencia GP, instead of there being a minute’s silence to honour Marco, I would prefer that there was a minute of total chaos with all the engines of the bikes of MotoGP, Moto2 and 125 all on and roaring together,” Paolo Simoncelli said during an interview on television program Domenica Cinque.

Simoncelli’s father added that he continued to be comforted by the affection shown by fans and colleagues in the wake of his son’s death.

“People have come from all over Italy and from abroad to say goodbye to Marco,” he said.

The idea of remembering an athlete with noise instead of silence is not new. Amongst the events remembered in Australia is that of Super Rugby team the ACT Brumbies, which held a ‘Minute of Applause’ for player Shawn Mackay in Canberra prior to a match in 2009 after the forward had passed away from injuries sustained after he was hit by a car in South Africa.

After initially stating that it would not race in Catalunya, Simoncelli’s Gresini Racing team has confirmed it will be at the track this weekend.

“The decision to participate was not an easy one, but we have made this choice as it is what Marco would have wanted,” team owner Fausto Gresini told MotoGP’s official website.

“Going out on track at Valencia is definitely the best way to honour him by doing what he most loved to do: Ride and experience the world of MotoGP,” said Gresini.

“This is why I believe that the best show of affection that we can make to Marco is by lining up our teams and riders for this race.”

“‘Super Sic’ will be present in the hearts of Hiroshi Aoyama, Michele Pirro and Yuki Takahashi, and I am sure that they will give him a most fitting tribute with their performances on Sunday,” Gresini concluded.

Japanese rider Hiroshi Aoyama will start in the MotoGP race with Michele Pirro and Yuki Takahashi competing in Moto2.