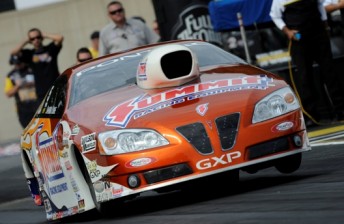 Line entered the 2011 NHRA Countdown to the Championship second in the Pro Stock point standings. He then raced to three consecutive final-round appearances, including wins in Dallas and Reading, in the first three races of the Countdown. In total, Line raced to six wins in eight final-round appearances for the season and posted seven No. 1 qualifiers.

“It feels unbelievable to win my second championship,” said Line.

“Timing is everything in our sport, and we got hot at the right time. The second championship definitely means more to me because as I’ve gotten older, I’ve learned to appreciate it, and realized how hard these things really are to get.”

Line, who won his first NHRA Full Throttle Pro Stock world championship in 2006, clinched his second title after he raced his Summit Racing Pontiac GXP to a semi-final-round appearance Sunday in Las Vegas.

Mike Edwards raced to the win in Pro Stock when he powered his Penhall/Interstate Batteries Pontiac GXP to a 6.641 at 208.30 past Allen Johnson in the final round. For Edwards, it was his fourth win of the season, 32nd of his career, and third in Las Vegas.

“To win the race, to come out here and qualify really well, and put four rounds together, we’ve been trying to do that for the last six or seven races for sure,” said Edwards.

“Actually, it’s been more than that, probably. But it feels good to come out and finally win a race. Hats off to all my guys for doing a tremendous job.”

Del Worsham raced to his seventh win of the season when he powered his Al-Anabi Racing dragster to a 3.823-second run at 318.77 mph past Spencer Massey. The win moved Worsham into the second spot in the point standings, two points behind leader Massey heading into the final race of the season.

“You can’t see the other guy, but there’s that feeling like when someone is staring at you, and you know they’re there. I knew [Spencer Massey] was lurking. He never saw me either. When my win light came on down there, I was proud.”

Ron Capps defeated fellow Don Schumacher Racing teammate Johnny Gray to collect his second win of the season. Capps drove his NAPA Auto Parts Dodge Charger to a 4.109 at 311.34 to secure his 33rd career win and fourth at The Strip at Las Vegas Motor Speedway.

“We’re fighting to get back into it,” said Capps.

“As soon as you start celebrating the win at the top end, you also think, ‘Gosh, if it weren’t for that DNQ, we’d be right in the middle of it.’ I want to win the championship with Tim and Kim [Richards, crew chiefs]. We’re going to try. I couldn’t believe that 4.10 in the final. I couldn’t believe the car stayed hooked up.”

While Capps raced to the win, his teammate Matt Hagan took the points lead away from Jack Beckman. Hagan now leads Beckman by one point heading into the final race of the season, and third-place driver Cruz Pedregon sits 26 points behind leader Hagan, and John Force Racing driver Mike Neff moved down to the fourth spot, 34 points out of the lead.

2008 world champion Krawiec defeated fellow Vance & Hines Harley-Davidson teammate when he powered his Screamin’ Eagle Vance & Hines Harley-Davidson to a 6.936 at 194.30 in the final round. It was Krawiec’s fourth win of the season and 11th of his career. The win also increased his points lead over second-place driver Hector Arana Jr. by 69 points.

“You know the most important thing here was consistency,” said Krawiec.

“Round-wins and round-wins. And I’ve just been trying to work on my riding and being consistent. That’s the one thing that shows. No. 1 qualifying cracks don’t get you Wally’s and points at the end of the weekend. It’s an awesome points system that we have going for the past couple of years with all the categories. You can see that it’s really working and that it makes it good for the fans.”