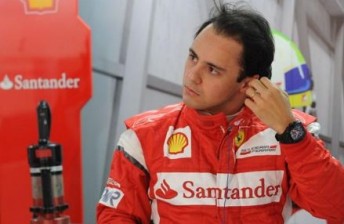 The dispute between Felipe Massa and Lewis Hamilton appears no closer to resolution following the pair’s collision in the Indian Grand Prix.

The Ferrari and the McLaren made contact for the sixth time this season when Hamilton attempted to overtake Massa into the fast Turn 5 as the race edged towards its halfway mark.

While Hamilton went on to finish in seventh place after being delayed by a right-front puncture, Massa was penalised for the incident, and later retired having broken his suspension on the track’s aggressive kerbing.

Predictably, the two drivers had differing views on the incident.

“He touched my rear wheel. So, to be honest I don’t understand why I have the penalty. It is not really understandable.”

Hamilton described the incident as ‘disappointing’, and claimed that he had attempted to make peace with the Brazilian following the pre-race minute’s silence for the late Dan Wheldon and Marco Simoncelli.

“My team worked hard all weekend as they always do. I don’t really know what else to say.

“We had the one minute silence before the start of the race and me and Felipe were standing next to each other.

“He hasn’t spoken to me in a long, long time so I put my arm around him and just said ‘good luck for the race’.

“But in the race I tried to overtake and I tried to come out of it because it didn’t look like he was going to give me any space, and we collided. I’m really, really sorry for my team.”

Massa later denied that Hamilton’s gesture had been an attempt to temper the aggression between the pair.

“He didn’t try to do anything,” said Massa.

“When I tried to speak to him he passed through. He did not look to my face, so no. Not here.

“Here after the one minute silence he was at my side and then he just said, ‘have a good race’. So this is trying to what? Have a good race? Is that not part of talking, or whatever?”

Just two races remain in the 2011 Formula One World Championship, with the Abu Dhabi Grand Prix set to run in two weeks time.