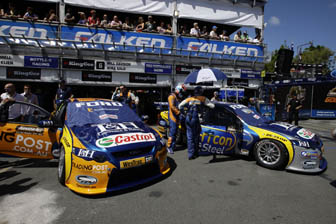 Ford Performance Racing could make a return to the Fujitsu V8 Supercars Series for the final two rounds of the 2011 season at Sandown and Homebush.

The factory Ford team is believed to be in discussions with reigning Australian Formula Ford Champion Chaz Mostert, who has contested the first five rounds of the second-tier series with Miles Racing.

Ford Performance Racing team principal Tim Edwards kept his cards close to his chest when approached by Speedcafe.com about fielding a car for Mostert.

“We’ve always looked at the Fujitsu Series, and at some point, we will re-enter that series,” he said today.

“If we had not sold a car to the D’Albertos (Wilson Security Racing) this year, we would have been running a car there.

“We don’t have anything locked in, but at some point, we are keen to enter the series.”

FPR has long held a desire to return to the Fujitsu V8 Series competition, having previously competed in the class with Michael Caruso (2007) and James Moffat (2010).

Edwards says that developing driver talent is only part of the reason why FPR is keen on entering a car in the series.

“I’ve been quoted numerous times about why we should be involved,” he told Speedcafe.com.

“My best example is Grant MacPherson. He got his break as a race engineer with James Moffat last year and that subsequently led him to be Steve Richards’ engineer in the final few rounds of 2010. This year, he is engineering Will Davison and doing a great job.

“To me, that is the best example of why we are looking at the development series.

“Of course there are all the things like developing drivers, but there’s a whole raft of reasons why we should be involved.”

Speedcafe.com spoke to Miles Racing team principal Wayne Miles. His only comment was that Mostert currently holds a contract with his team.

Miles Racing’s second driver Ash Walsh will continue with the Queensland-based team for the remaining rounds of the 2011 Fujitsu V8 Supercars Series.