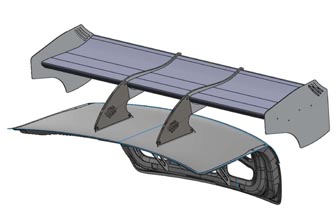 New Zealand’s V8SuperTourers class will feature an aggressively-styled rear wing in its inaugural season next year.

As illustrated by these drawings, the V8-powered common chassis class will compete with a large, distinctive DTM-inspired rear wing – further setting the cars apart from their Australian V8 Supercars cousins.

The DTM wings add to the DTM-developed Hankook tyres that the class will compete on. CLICK HERE for more on V8SuperTourers tyre deal.

The design of the wings were penned and constructed in-house at Pace Innovations, using its new CFD package.

Two units are currently on the way to New Zealand where V8SuperTourers organisers will test two different end plates on its Holden Commodore prototype at Pukekohe Park Raceway. 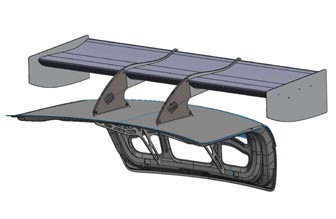 Organisers are hoping to use the F1-style rear slotted end plate, although they may prove to be too efficient, meaning they might have to adopt the standard option (see images right).

The rear wing being used on the prototype has been a regular wing off a Holden Commodore V8 Supercar.

The theory behind the new rear wing is that it will produce more downforce and less drag than the V8 Supercars wing.

V8ST’s Managing Director Mark Petch explains that a simple yet effective process will be undertaken over the next week.

“Because of the need to do extensive ‘coast down’ testing, we will use the Pukekohe race circuit’s long back straight for the R&D development on the rear wing,” Petch told Speedcafe.com.

“With the added benefit of Race Technologies’ state-of-the-art 20Hz differential GPS system, this ‘real time’ measurement produces a very accurate speed over time graph that should speed the process up, which is historically long and drawn out.

“We hope to have it all complete with in two days of testing, providing we don’t have to deal with high winds.

“Pukekohe will also allow us to quickly develop a good aero balance between our new front bar and new rear wing because of the high speed nature of both turn one, and the need to carry the maximum speed possible over the top of the hill.”