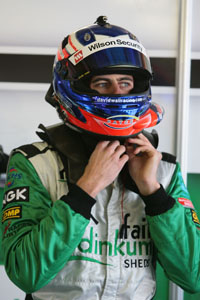 David Wall has emerged as a threat for a seat in the 2012 V8 Supercars Championship.

Wall, currently competing with Tony D’Alberto Racing in the Fujitsu V8 Series, has put himself in the mix for a drive in the Championship proper, confirming he is in discussion with the teams that are yet to lock in their 2012 line-ups.

Wall has driven for Brad Jones Racing in the past two endurance seasons, partnering Karl Reindler in the #21 Fair Dinkum Sheds Commodore.

With Reindler also in the market for a possible team switch, Wall has been mentioned as one of many drivers fighting for a place at BJR.

“We all want to get to the Main Series and try and make a living out of what we enjoy doing,” Wall told Speedcafe.com.

“We are trying like everyone else to get in the Main Game. Whether or not it will happen, there’s many balls floating around in the air and we’re waiting to see where they land.

“My gut feeling is that it’s a 50-50 thing. If I get the opportunity, I’ll be taking it with both hands and running with it and doing the best job I can possibly do.

“I feel I have a good relationship with Brad Jones and the boys. I get on very well with them there, and their equipment is very good as well. It’s one of my options, but one of everyone else’s as well. It’s all very much in the air and we won’t know a definite answer until early November.”

When asked if he thinks he is ready to take the step up, Wall gave an honest response.

“I don’t know if you actually know if you’re ready until you’re actually in there and doing it,” he said.

“I think the best way to find out is to be against the best guys in the country in the best equipment.”

Wall currently sits 11th in the Fujitsu Series – his first full year in the class. He says that he will consider another season in the Development Series if his Main Series options do not materialise.

“Doing another season of Fujitsu Series is an option, for sure,” Wall said.

“The Fujitsu Series is definitely the second option.”