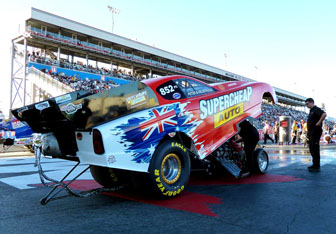 Peter Russo on the starting line in Las Vegas

Russo and wife Helen were in Las Vegas for the Big O Tires Nationals at The Strip on the weekend, but failed to qualify their new Murray Anderson-built fuel coupe for the tough 16 car field.

The small, all-volunteer Australian crew finished building the Monte Carlo-bodied flopper at the track before making two qualifying attempts, the first thwarted by an ignition issue, the second a shut-off launch as planned.

While the on-track performance was low-key, Anderson’s craftsmanship on the Supercheap Auto-backed car drew praise from his US peers.

Russo elected to miss Saturday’s final qualifying session, instead deciding to test at The Strip tomorrow (Tuesday Australian-time) before re-loading their new transporter and heading back to their Los Angeles base for the finals on November 10-13.

CLICK HERE for Speedcafe.com’s full report from the Big O Tires Nationals at The Strip.