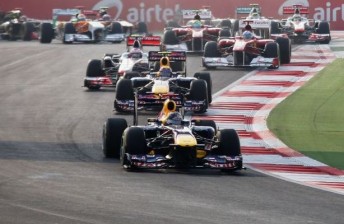 Sebastian Vettel has dominated the inaugural Indian Grand Prix, leading every one of the 60 laps around the Buddh International Circuit.

The 24-year-old German took the record for most laps led in a single season during the race, before setting a new lap record on the final lap.

McLaren driver Jenson Button kept Vettel honest throughout the afternoon, finishing 8.4s adrift of the Red Bull after passing both Fernando Alonso and Mark Webber on the opening lap.

The gap between Vettel and Button hovered around the five second mark for much of the afternoon, with the Briton closing the gap by making his two pitstops slightly before his rival.

Webber shadowed Button over the opening stint, but fell back in the middle stages – eventually finishing behind Alonso after being forced to make an early second stop due to high tyre degradation.

By contrast, Michael Schumacher stayed out the longest before making his final stop, allowing the seven-time World Champion to leap-frog Mercedes team-mate Nico Rosberg for fifth.

Lewis Hamilton was seventh having made contact with Felipe Massa for the third time this season. Hamilton tried to take fifth place from his Brazilian rival at the fast Turn 5 on Lap 24, resulting in contact between the right-front corner of the McLaren and the left-rear corner of the Ferrari.

While Hamilton initially appeared to come off worst as he pitted immediately to replace a punctured right-front tyre, Massa was handed a drive-through penalty for the incident, and would eventually record a DNF after repeating his qualifying effort of breaking his suspension on the circuit’s aggressive kerbing.

Senna sat ninth with just three laps to go, but was forced to pit in order to take on the harder compound tyres.

Sebastien Beumi looked likely to join his Spanish team-mate in the points before suffering an engine failure on Lap 26, while Pastor Maldonado, Timo Glock and Kamui Kobayashi also failed to finish after a pair of incidents on the opening lap.