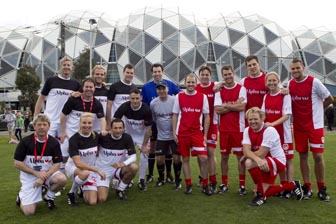 V8 Supercars driver Paul Dumbrell has tested himself against some of Australia’s sporting greats in a celebrity football match at AAMI Park in Melbourne.

The Bottle-O Racing driver was invited to play the match as part of Westpac bank’s Alpha division. Alpha is Westpac’s ‘Sports and Entertainment Specialists,’ helping handle the finances of professional sporting players and celebrities.

Part of the Alpha’s brief is to assist stars to avoid blowing short-lived windfall incomes while they are young.

Dumbrell, regarded as one of the fittest drivers in the V8 Supercars field, said he enjoyed the experience, even though he felt he couldn’t keep pace.

“Prior to the match, I did six or seven hours worth of training – a regular weekend’s session. But then I played two 14 minute halves and I was spent. I couldn’t breathe!” he said.

“It probably didn’t help that I was running around like my head was cut off! It was good fun, though.

“We had Mark Bosnich as our captain, and he was loud and vocal. His skills were just phenomenal.

Dumbrell said that he played in no specific position on the pitch and will know better for next time.

“I was just the guy who chased the ball. Where ever the ball was, I would have been somewhere near that,” he said.

“We lost the game 2-4, but there’s going to be a re-match later in the year, so hopefully we can get on the better side of the ledger.

“There were a lot of guys who I grew up watching playing football or soccer, and it was cool to be involved behind the scenes. These sort of things are just for some good laughs.”

Dumbrell will get back behind the wheel of his Ford Falcon V8 Supercar in two weeks time at Symmons Plains Raceway for the Falken Tasmania Challenge (November 11-13).