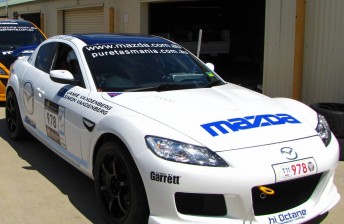 Jamie and Simon Vandenberg will contest their first ever rally outside of Tasmania when they hit the tarmac for Mazda at next month’s Targa High Country in Victoria.

This will be Jamie and Simon’s second outing in the factory-backed, rear-wheel drive RX-8 SP. In April, the Burnie-based brothers finished just two seconds off fifth outright in the car-breaking Targa Tasmania endurance rally.

“It’s fantastic to be back on the Mazda team,” said Jamie Vandenberg.

“Driving for a top manufacturer with a professional racing outfit behind you allows you to focus solely on getting the car through each stage.

“We went into Targa with very little seat time in the RX-8 SP so it took a couple of days to get to know the car and how it reacts under different conditions. By the end of the event we were feeling really confident.”

So confident in fact that, on the last day of the event, Jamie and his co-driving brother clocked the fastest time on the event’s longest and most treacherous stage, the 58km Mt Arrowsmith.

This may be their first Targa event outside of Tasmania but the brothers, who write and supply pace notes for rallies across Australia, are already familiar with the 217 kilometres that make up the Targa High Country course.

Impressed by their performance at Targa Tasmania, Mazda Motorsport Manager Allan Horsley is pleased to have the siblings back on his team.

“Jamie and Simon are easily the most accomplished rally combination to come out of Tasmania,” said Horsley.

“It’s great for them to finally have the opportunity to rally competitively outside of their home state.”

After a successful testing session with his drivers at Wakefield last week, Horsley says the Mazda Motorsport team is ready to take to the mountain.

“Both Simon Evans and Jamie were straight on the pace as soon as they hit the track and the cars held up extremely well under intense testing conditions,” he said.

“It also allowed for some final tweaking on the RX-8 SP with Jamie testing some new Hankook tyres and suspension and brakes package.”

The 2011 Targa High Country will kick off on Friday 4 November in Mansfield with a prologue town stage deciding the order of competition for day one of rallying.

On Saturday the competition field will travel from Mt Buller to Whitfield return and then on Sunday, Mount Buller to Eildon return, culminating with a gala finish on the mountain in the afternoon.