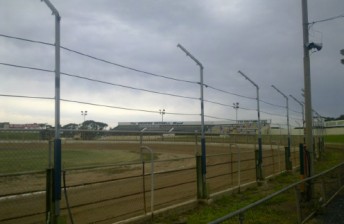 With it’s season beginning this weekend, Adelaide Speedway venue, Speedway City has embarked on a number of large scale upgrades to the facility ahead of hosting the 50th Australian Sprintcar Championship in January.

The venue (formerly known as Speedway Park) has had brand new catch fencing installed, along with a number of improvements in the spectator areas.

The upgrades have already paid dividends, with Fuchs Lubricants signing on as naming rights partner for the 50th Australian Titles and a number of other sponsors getting on board the leading venue.

Revolution Racegear – a long-term supporter of Speedway City – has re-affirmed its commitment to the Track Championship.

The fence improvements will step up safety for both competitors and fans at the clay 400 metre speedway, whilst the outer ground improvements ensuring that patrons attending the venue will be comfortable.

The week of the Fuchs Australian Sprintcar Title promises to be massive for Speedway City – beginning on the 25th of January with the Prelude event.

Australia Day will feature a Pit Party and traditional Calcutta, before racing is conducted over the 27th and 28th of January.

The change in date to be around the Australia Day weekend in honour of it being the 50th Championship has necessitated a change for the Grand Annual Sprintcar Classic at Warrnambool.

Traditionally held across that weekend, Premier Speedway has moved the event forward to be conducted on Saturday nights January 21 and 22. For sprintcar fans, it provides a massive two weekends of entertainment.