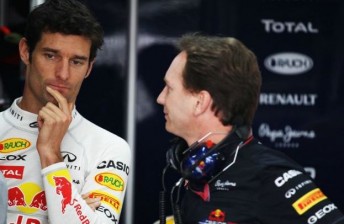 With Red Bull and Webber’s team-mate Sebastian Vettel having already wrapped up the Constructors’ and Drivers’ Championships respectively, Horner says that helping Webber to second is a clear target.

“I think that from a team perspective we will do everything we can to help Mark,” Horner told Autosport of the situation.

“It is a conversation we would need to have with the drivers, but I am sure Mark would want to achieve it under his own merit.

“I am not sure he would like to be given something, but I am quite sure if asked the question, Sebastian would be willing to do that.”

Horner however insisted that team orders are unlikely to come into play until the season finale in Abu Dhabi.

“I am not sure Mark would like to achieve the result that way, so I think it is probably just a better approach to let the guys race and get on with it, and that is the approach that we are going to certainly adopt,” said Horner.

“If there was a situation at the last race where a position could make a difference then that’s different. But for the time being we are going to let them race and get on with it, as we have done all year to be honest.”

Second in the championship would be a career best result for Webber, who finished third last year behind Vettel and Ferrari’s Fernando Alonso.