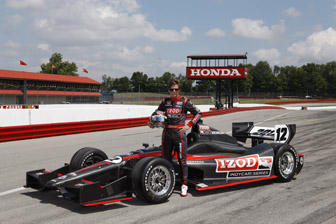 Dan Wheldon with the DW12

Dallara will honour the memory of the late Dan Wheldon by naming its new-for-2012 IndyCar single-seater the ‘DW12.’

Wheldon, 33, helped the Italian chassis manufacturer develop the new car before he was killed during the IndyCar season finale at Las Vegas.

“As a homage to the work he did, we’ve decided to dedicate the 2012 IndyCar Dallara to him, and from today it will be called the DW12,” Dallara said.

The DW12 is back in action now with newly-crowned champion Dario Franchitti taking over the car for engine testing duties for Honda at Sebring International Raceway.