COTF engines to have power limit

COTF engines to have power limit 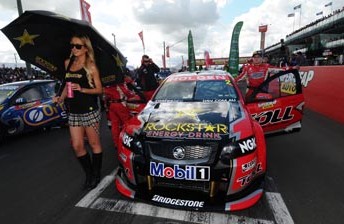 V8 Supercars will mandate a maximum power output for engines when its Car of the Future comes online in 2013.

While the current regulations see the 5.0 litre power plants strictly controlled in terms of dimensions, materials and minimum weights, an actual output ceiling has never before been mandated.

The final power figure is yet to be set, but according to V8 Supercars motorsport manager Adam Perry, expect the cars to be making around 600bhp.

“We’re still yet to finalise what we’re saying a definitive power and torque figure is – we’re doing some work in the background on that now,” Perry told Speedcafe.com.

“That will be fundamentally determined by what the power to weight ratio changes are from the current car to the new car.

“We still haven’t built a production car where we know what we’re at in terms of weight. If I was a betting man, I’d say we’ll be close to 1300kg when you add in all the driving extras.

“If you run those numbers, you’re probably going to be at a 600hp engine roughly.”

Although initially targeting a major reduction in cost, the a collective desire from the teams to minimise the inventory changes necessary when switching to the COTF will leave the engine regulations largely unchanged.

V8 Supercars says that it is still collecting data on the teams’ current engine programs ahead of finalising the new regulations.

“They’ll be a number of areas that we’ll look at so the teams can bring that (the power output) back without having to buy a heap of new inventory,” said Perry.

“You can do that through a multiple ways – camshafts, restrictions, there’s a lot of ways we can do it. We could even knock revs out, and that would be a preference.

“We’ve got a list of key performance areas in the engine where if we just take a little pieces out of those, rather than one chance here or there, that will stop teams heavily developing in another area to get performance back.”

The two Car of the Future prototypes are running Craig Hasted-built examples of the current ‘unrestricted’ engines, featuring the new for 2013 fly-by-wire throttle system.

Hasted’s company continues to work with V8 Supercars to develop the alternative common engine, which is expected to feature a range of off-the-shelf racing parts for use by teams without Ford or Holden support, or an additional manufacturer that wishes to join the championship.

“It’s on its way, but there’s still a long way to go,” said Perry of the common engine.

“We’ve been extremely busy with getting the prototypes running, and getting the fly-by-wire throttle set-up working is a major undertaking, so a lot of our resources have gone into that.

“We’d probably expect the generic engine to be ready for testing early next year.”

V8 Supercars has now confirmed that the two COTF prototypes will be released to the public at the 2011 season ending Sydney Telstra 500.

The Holden Commodore VE had its first run alongside the Ford Falcon FG at Eastern Creek on Tuesday, but completed a limited number of laps due to persistent wet weather.

CLICK HERE for Speedcafe.com’s Car of the Future story on the tyre development process and progress.