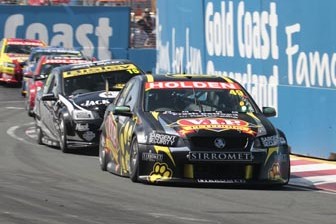 Boris Said is one of the most colour characters to ever sit in and race a V8 Supercar.

His famous flamboyant NASCAR driving style was brought to the Armor All Gold Coast 600 last weekend, where he partnered Steve Owen in the #49 VIP Petfoods Commodore VE.

After initially finding the going tough in Australia’s unique racing category, by the end of the weekend, he was setting some competitive times.

Speedcafe.com’s Grant Rowley spoke to Said about his co-driver Owen and his future in V8 Supercars.

SPEEDCAFE: You teamed up with Steve Owen at Surfers Paradise. He’s been in the sport for a long time but has never had a chance to sink his teeth into a drive in the category. Right now, he doesn’t have a deal for next year. Having been his co-driver for the weekend, what’s your impressions of him?

BORIS SAID: To be honest with you, after seeing him going about his weekend, the guy has speed. He’s a top five guy, and that’s a pretty hard accomplishment. It’s hard to do that in V8 Supercars. 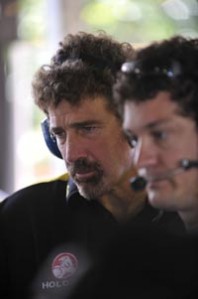 So he’s got plenty of speed, and a smart race car driver. I sure hope he can stay in V8 Supercars.

SPEEDCAFE: If he couldn’t get a V8 Supercars drive, do you think he could do some road course competition in America?

America’s economy is very tough right now. There’s a lot more drivers than there is demand, so it would be tough. There’s very few of us that are being paid to race cars.

But I would think that with his speed and some positive recomendations from myself and others, Steve would the type of guy that teams would chase.

I think he would excel in any road racing class in the world.

SPEEDCAFE: This was the second time you’ve been to Australia to race V8 Supercars. What did you think of your experience on the Gold Coast?

SAID: I loved everything about it except for that chicane thing. I had five strikes 20 laps in, so for the last laps of my stint, I had to go really conservative to avoid a drive through penalty.

I loved the experience. I was humbled to be that far off the pace at the start of the weekend, but I chipped away and git closer and closer as the races wore on. One more shot at it, I think I’d be pretty good at it.

SPEEDCAFE: Can we expect you to put your hand up if you are invited back?

SAID: Yeah, my hand is up right now. I hope I get invited back. I’m suyre they’ll be a long list of drivers, but I hope I get the phone call.

SPEEDCAFE: Would you like to see some of your NASCAR buddies come out and do the race? How do you think they’d adapt to it?

SAID: I heard a rumour that they were going to move the race to December, and if they do that, they’ll get some takers from NASCAR.

Anybody that goes there will be humbled. No one is going to run in the same ZIP code as the regulars, but I think the way they run the event with the internationals, it makes it a pretty even playing field.

If anyone asks me about it, I would definitely encourage them.