Boris Said: Owen is a top five guy in V8s

Boris Said: Owen is a top five guy in V8s 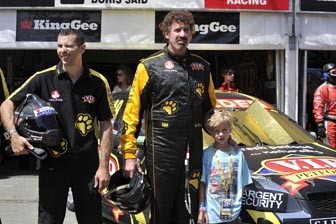 Steve Owen is one of V8 Supercars top five drivers and deserves the opportunity to remain in the category, according to American race driver Boris Said.

Said teamed with Owen in the #49 VIP Petfoods Commodore VE at the Armor All Gold Coast 600, qualifying fourth for Saturday’s race before finishing 18th and seventh in the two races.

Owen, currently 17th in the V8 Supecars Championship points standings, does not have a confirmed drive for next year.

Said rates Owen as one of V8 Supercars’ best drivers and says he deserves to be in the series.

“To be honest with you, after seeing him going about his weekend, the guy has speed. He’s a top five guy, and that’s a pretty hard accomplishment. It’s hard to do that in V8 Supercars,” Said told Speedcafe.com.

“So he’s got plenty of speed, and a smart race car driver. I sure hope he can stay in V8 Supercars.”

Said says that if Owen can’t find a suitable seat in the V8 Supercars Championship next year, he could assist in sourcing him a drive in American road course racing.

CLICK HERE for this week’s edition of Cafe Chat with Boris Said.