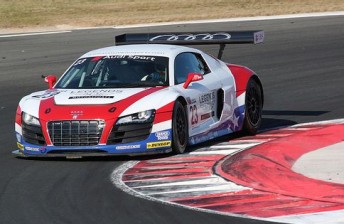 At least three Audi R8s are set to take to the grid for next year’s Armor All Bathurst 12 Hour following confirmation that Anglo-American team United Autosports will travel to Australia for the race.

The trip to Australia comes as part of a push towards endurance racing next year, with the team entering the Dubai 24 Hours and Gulf 12 Hours (at Yas Marina) in January prior to the February 26 Bathurst race.

While the team’s main focus will be on its recently announced McLaren MP4-12C program for Stephane Ratel’s booming Blancpain Endurance Series, Brown says the three ‘winter’ races provide an opportunity to keep the team’s relationship with Audi going.

“We couldn’t find a better way of moving into our third year as a racing team than by competing in such classics as Dubai, Abu Dhabi and Bathurst; three exciting endurance events which are considered a ‘must do’ for any aspiring racer,” said Brown. “It’s also a fitting way to continue our relationship with Audi into 2012.”

In addition to its GT programs, United Autosports has dabbled in prototype sportscar racing this year, entering a Riley-Ford in the Daytona 24 Hours and an Oak Pescarolo-Judd in the Petit Le Mans.

The team is currently on the lookout for drivers to compete in its entry at Bathurst.